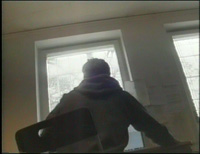 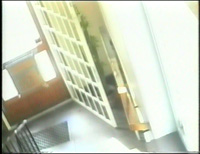 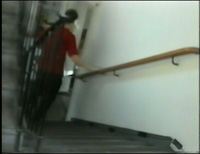 “We all can recognise the feeling when something is going to happen. Sometimes you get those feelings in a situation in real life. A feeling just a second before: just right now something will happen. In the movies the director often build up towards a crucial point to create a maximum of excitement and expectation. The minutes before that point the play and actions go down to a minimum. The sounds are few so you can here every breath taken on the screen and the excitement is strengthen with suggestive music and sound effects. This feeling is present in Karin Hansson and Åsa Anderssons piece. The work is done with four probation cameras at an office in Stockholm. Images of what is going on at the place are switched at short intervals. We see people pass by, but we don’t know what they are doing. To this a very suggestive music is added. The question is when the awaited and expected action is going to happen. Åsa Andersson and Karin Hansson teaeses their audience. What we are given is just an ordinary day at the work in disguise. Their piece is also playing on common clichés in movies and television series. Will something special happen? Probably not, but who knows? Everything is possible while this work of art takes place right here right now, in real time.”